In late 1914 the world was threatened by war. Shackleton volunteered to cancel his plans for an expedition and placed his ship at the disposal of the UK Government. The First Sea Lord, Winston Churchill, instructed him, however, to proceed. Shackleton accordingly headed south, but chose to avoid the Falkland Islands, which he reckoned might be attacked by the Imperial German Navy, and to approach Antarctica from the relative safety of South Georgia. And indeed, it was as Endurance entered the Weddell Sea that the British and German fleets engaged in the Battle of the Falklands.

Shackleton’s aim for his Imperial Trans-Antarctic Expedition (the “Endurance Expedition”) was to achieve the first crossing of the White Continent from the Weddell Sea via the South Pole to the Ross Sea.

Endurance too encountered difficulties, becoming stuck in the dense pack ice in early 1915 and the crew had no choice but to abandon ship and set up a makeshift camp on the ice, as the sea ice overwhelmed the ship. On that day, 21st November 1915, Captain Frank Worsley wrote the coordinates of the location in which the ship sank in his diary: 68°39’ 30”S, 52°26’30”W. One of the objectives of the Endurance22 expedition is to use that information to help locate the lost vessel. 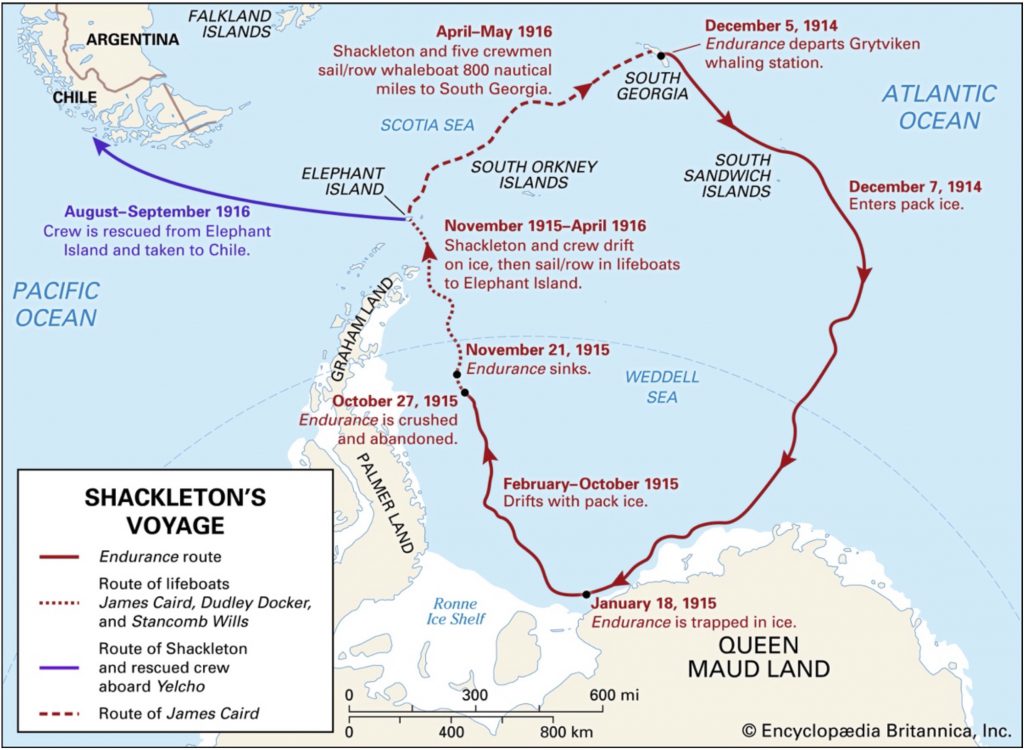 The band of 28 crew would have had to draw upon every ounce of strength, tenacity and courage that they possessed in order to survive the failed expedition, which is now remembered in history as one of the most epic feats of endurance in the heroic age of Antarctic exploration.

They trekked to the edge of the sea ice, then sailed in the salvaged ship’s lifeboats to Elephant Island where there were seals and penguins to eat and a sheltered bay in which to camp under the upturned lifeboats.

However, knowing that it was unlikely that anyone would come to Elephant Island to rescue them because it was so remote, Shackleton and Worsley led a small party in one of the open boats to South Georgia, where there was a whaling station. Worsley navigated with just a sextant over the wild seas of the Southern Ocean. Landing on the south side of the island, Sir Ernest then had to traverse the hitherto uncharted and uncrossed mountains and glaciers to reach the Norwegian whalers. Rescue missions to reach the stranded expedition members at Elephant island were thwarted by the thick sea ice. Finally, on 30 August 1916, the fourth attempt was a success, and the expedition party on Elephant Island was taken to safety in Punta Arenas by the Chilean tug ‘Yelcho’. 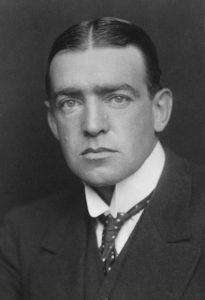 Sir Ernest Henry Shackleton (15 February 1874 – 5 January 1922) was a polar explorer involved in several British expeditions to the Antarctic in the early 1900s. Shackleton was a member of Captain Scott’s Discovery Expedition (1901–1904), during which he, Scott and Edward Wilson set a new southern record by sledging to 82°S.

Shackleton’s Imperial Trans-Antarctic Expedition (1914 – 1917), was an attempt to make the first overland crossing of the Antarctic continent. The ship chosen for the expedition was the Endurance, built in Norway and launched on 17 December 1912. She was initially named Polaris and was specifically designed for operating in ice-covered waters.

The expedition left the UK in August 1914, and departed from South Georgia for the Weddell Sea on 5 December. The expedition soon encountered significant sea ice cover and on 18 January 1915 at 76°34’S, Endurance became trapped in the ice. 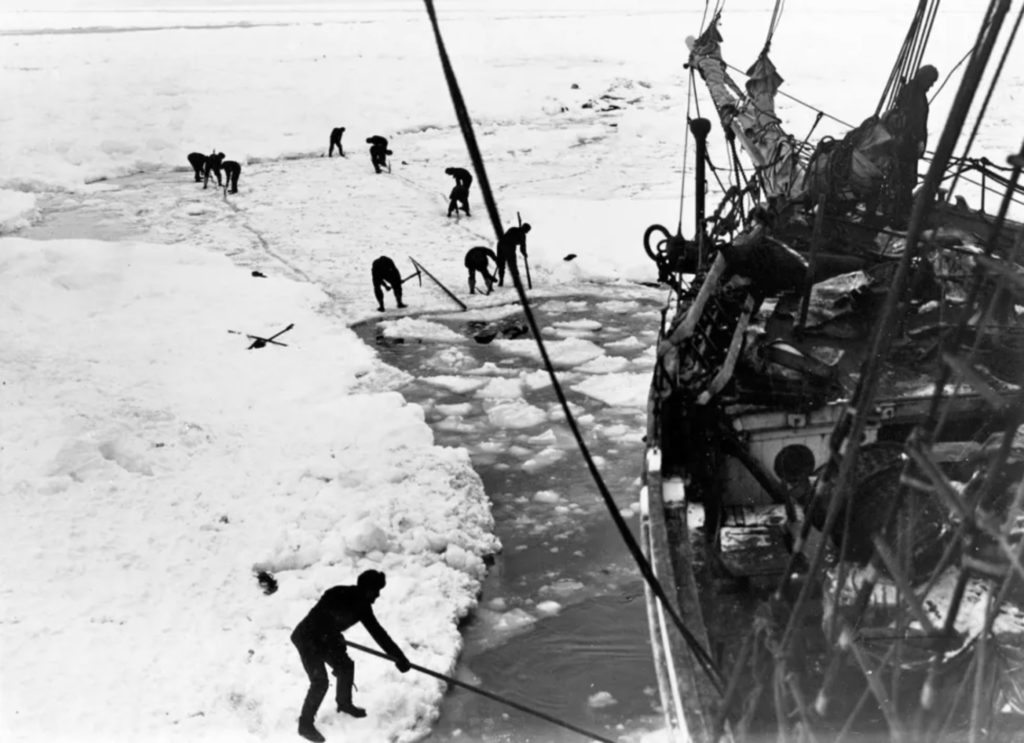 Several attempts were made to free Endurance from the ice, but to no avail and by the end of February, temperatures had fallen and the ship was frozen in for the winter.

The expedition members remained living aboard the Endurance for several months until 27 October 1915 when Shackleton took the decision to abandon ship. Their position was 69°5’S, long. 51°30’W. The Endurance was under heavy pressure from the ice which tore away her rudder post and crushed in her stern.

Shackleton wrote: “we have been compelled to abandon the ship, which is crushed beyond all hope of ever being righted, we are alive and well, and we have stores and equipment for the task that lies before us. The task is to reach land with all the members of the Expedition. It is hard to write what I feel”. 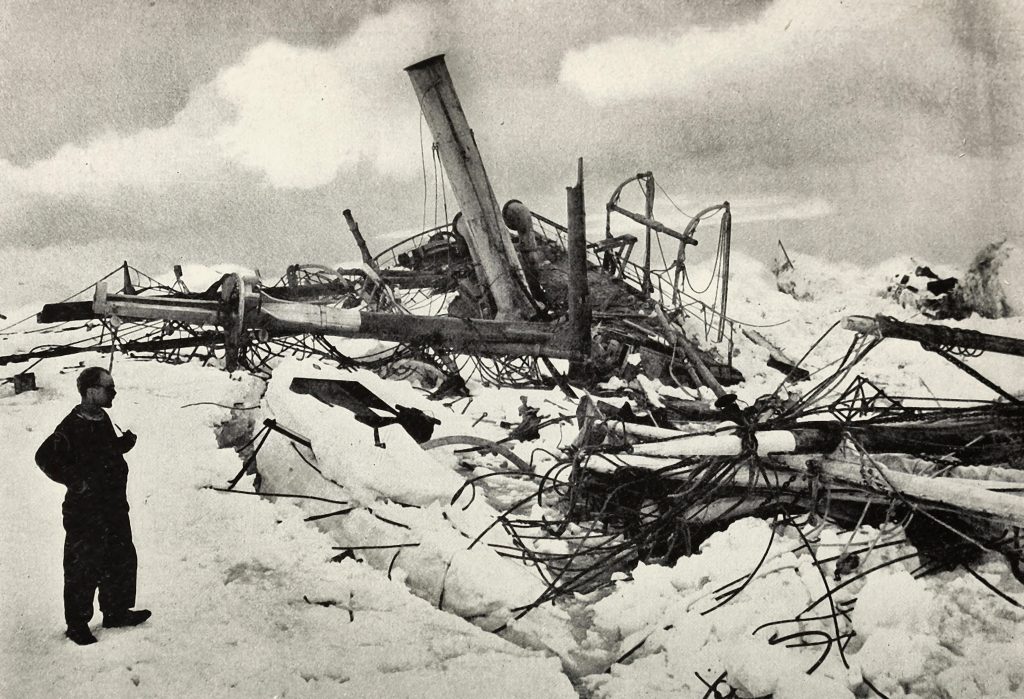 The Endurance finally broke up and sank in the Weddell Sea on 21 November 1915.

The 28 men of the expedition were isolated on the drifting pack ice hundreds of miles from land, with no ship, no means of communication with the outside world and with limited supplies. The story of their survival and eventual rescue is one the greatest polar stories.

Using three lifeboats from Endurance, the men travelled initially across the sea ice and then open water to reach Elephant Island. From there Shackleton and five others used one of the lifeboats, the James Caird, to sail to South Georgia to raise the alarm and seek rescue. The remaining expedition members were rescued from Elephant Island on 30 August 1916.

The wreck of the Endurance remains one of the most iconic of all shipwrecks and has never been located since it sank in 1915.